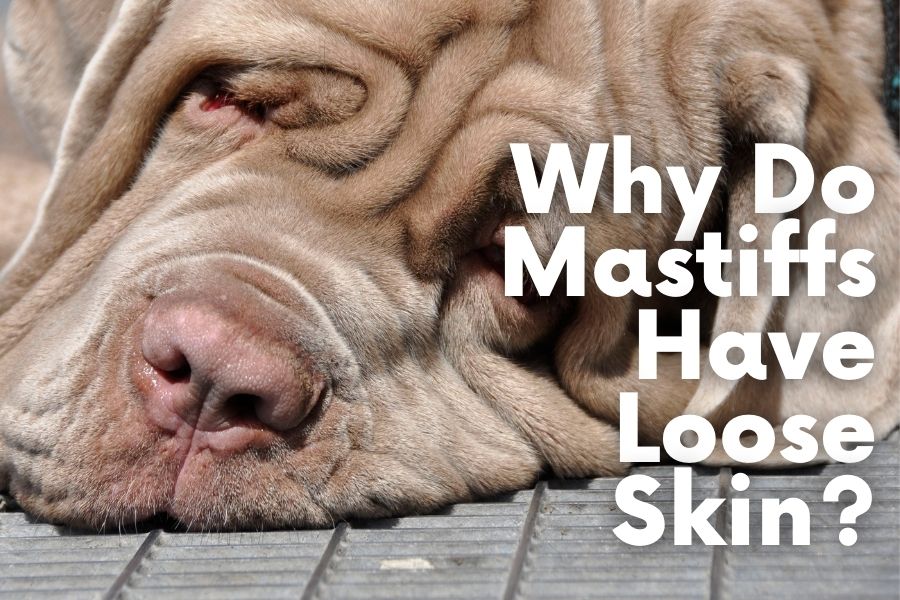 Some dog lovers dislike the idea of sagging skin on dogs; I’ve heard comments such as “it looks like their skin is sliding off their bones.” I’m sure you’ve listened to something similar or worse.

But if you’re a Mastiff lover, then you’ll undoubtedly find their loose skin all part of the charm and attraction of the breed. A Mastiff that fits into their skin wouldn’t be a Mastiff, would they?

But have you ever wondered why Mastiffs have loose skin?

Mastiffs and dogs like them have had sagging skins for as far back as they’ve been in existence. There’s a serious purpose behind the droopy face and neck of a Mastiff.

These skin folds can be a hiding place for some nasty bacteria, or fungus and owners must clean and dry them properly. But back when the Mastiff was a hunting and war dog, their over-developed skin was crucial to the dog’s very survival.

The loose folds of skin naturally protected Mastiffs from enemy bites. Not only that, the same enemy would have been powerless in preventing the Mastiff from whipping around and grabbing them by the jugular, even though the enemy was still gripping them tightly.

What might be even more crucial for the Mastiff when any enemy attempted to bite all they got for their effort was a mouthful of loose skin; no muscle, no bone or blood vessels. This lack of injury meant a Mastiff could continue fighting despite how many bites they had to take.

What is the Purpose of Dog Jowls?

Most dogs were bred to fulfill a purpose; dog breeders and owners didn’t put them on the planet for a free ride. However, if the dog was born a Pug or a similar dog breed, the only hard work they had to master was climbing on someone’s lap.

But dogs were there to serve humans in whatever capacity owners needed them. For example, hunting, guarding, herding and fighting were the more common reasons for owning dogs going back thousands of years.

Dogs like the Mastiff were fighting and guarding dogs, but mostly fighting. You don’t get to become a Roman war dog unless you have some special skills.

When dogs fight, they attempt to grab onto the other dog’s face. A severe enough bite there, and most dogs would be finished. Extra-large jowls that hang down offer a considerable amount of protection. Loose wet, slobbery skin is tough to get hold of, providing an extra layer of protection.

Why Do Mastiffs Have Such Big Jowls?

As I mentioned previously, Mastiffs were the ultimate fighting machine and war dog. In the thick of a battle, any enemy trying to bite the Mastiff would quickly become unstuck because trying to get a purchase on the Mastiff’s face would have been incredibly difficult because of the over-large slobbering jowls.

Why Do Mastiffs Have Loose Skin Around Their Neck?

The loose skin around a Mastiff’s neck is called the dewlap, and it serves a crucial purpose in the development of the Mastiff. Because Mastiffs were fighting dogs, the dewlap provides additional protection and covers the jugular vein with layers of skin. Another dog attempting to bite in that area would only be biting down into skin and fur.