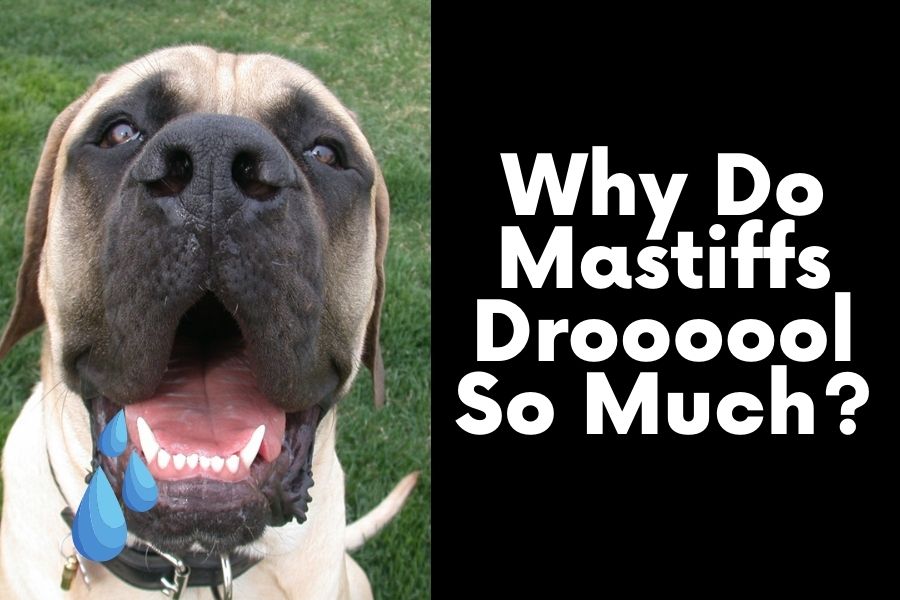 When you told your family and friends you were getting a Mastiff, didn’t they try to warn you about the dog’s drooling? Or maybe they did, and you didn’t think it was that much of an issue. Now you’re thinking, why do Mastiffs drool so much?

You probably think it’s physically impossible for one dog to produce so much saliva, all day, every day. But, it’s typical with all Mastiff-type dogs that they excessively drool, just like they tend to have loose skin. Maybe you’re getting used to it by now, but you would still like some answers.

Why Do Mastiffs Drool?

Every dog produces saliva the same as humans, but generally, the bigger the dog, the more saliva they make, and they don’t come much bigger and heavier than a Mastiff.

The dog’s size is not the only reason. If you take a close look at a Mastiff’s lips, you can see they sag open at the sides, making it impossible for the dog to hold any reasonable volume of saliva in their mouths. Likely, Mastiffs don’t even realize they’re drooling.

Food anticipation is another reason. The smell of food starts a dog salivating; eventually, with the same result, the Mastiff cannot hold it inside their mouth. Overheating makes dogs pant, and in turn, that creates yet more drool.

What Age Do Mastiffs Start To Drool?

Typically a Mastiff won’t begin drooling until they’re fully grown. So for the first two years, you’ll probably not see too much drool, but don’t worry, there’s a drool machine in there somewhere, and once it starts, there’s no turning off the tap.

What Breed Of Mastiff Drools The Least?

A Tibetan Mastiff probably drools the least. That’s not to say they don’t drool at all, but their lips don’t tend to sag as much as other Mastiffs. However, if you want a Mastiff similar in appearance to the English Mastiff without quite so much drool, the American Mastiff could be the best choice.

Do Any Mastiffs Not Drool?

If you’ve set your heart on a Mastiff, then there’s going to be drool. It’s all part of the pleasure in owning a Mastiff, a bucketful of saliva each day. Honestly, if the thought of drool makes you feel a bit icky or uncomfortable, a Mastiff is going to be a poor choice because all Mastiffs drool.

How Do I Stop My Mastiff From Drooling?

I don’t see how it’s possible to stop a Mastiff from drooling. Mastiffs have droopy jowls and wide, saggy lips. Saliva will build-up, and it overflows the lips before the dog can swallow the spit. You might call it a design flaw, or then again, it could be design genius because otherwise, Mastiffs might throw up swallowing all the saliva they produce.

You can minimise the amount being transferred to your walls and furnishings by always having clean towels around. Some owners tie a towel around the dog’s neck, like a bandana, to catch some of the dripping salivae. Generally, just being around to wipe the dog’s mouth when you see the drool begin to appear.

There are some drastic measures, such as facial surgery, which I’m not even going to discuss.