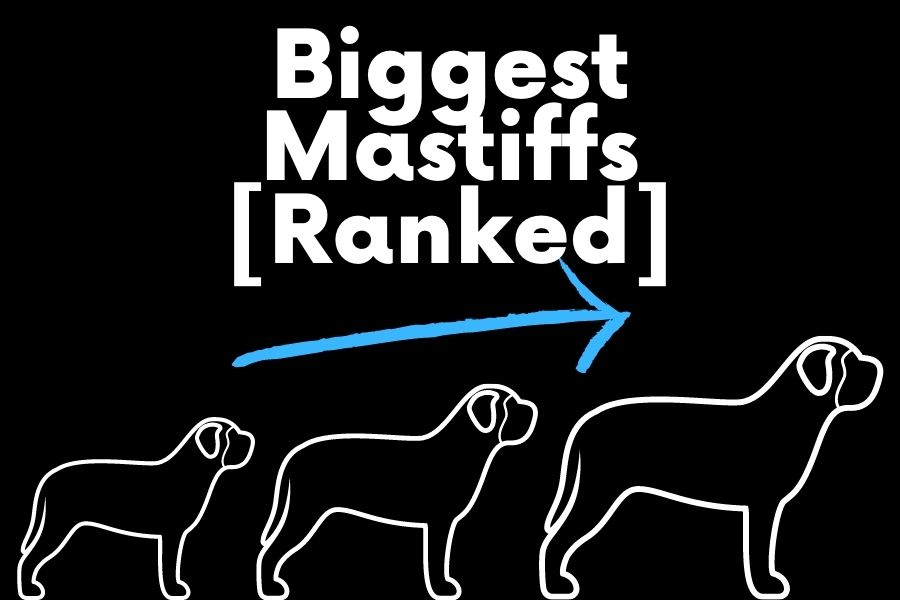 All Mastiff types descend from the ancient Molosser dogs; these dogs were originally from mountainous regions in Asia, and you can trace their history back over 3000 years ago. Owners of the Molossers would almost certainly have used these dogs to guard their flocks of sheep and goats from predators.

Many of today’s breeds, not just Mastiffs, owe their origin to the Molosser, including dogs such as the Rottweiler and even the Saint Bernard.

For centuries Mastiff-type dogs served humans in many unfortunate and cruel ways. For example, as war dogs for the Roman Legions, guard dogs, and brutal entertainment forms such as fighting lions, bears, and other ferocious animals. Romans even pitted Mastiff-type dogs against gladiators in their arenas.

These giant dogs were taken across various lands by armies or traders, and they crossbred with local dogs they met. This crossbreeding is how many of today’s breeds came into being.

Owners and dog fanciers bred Mastiffs in England from the 15th century, and owners used them in brutal bull and bear-baiting sports until the government outlawed the sport in 1835.

How Heavy Are Mastiffs?

Most Mastiff-type dog breeds make fantastic family pets and protectors. However, bringing up such massive dogs take time and masses of dedication, so Mastiffs are not for everyone. In addition, a great deal of time needs spending socializing and obedience training Mastiffs.

If you count the Bullmastiff, there are eighteen Mastiff breeds, and their sizes can vary. Of course, they are all still giant dogs by any standard.

The Argentian Mastiff weighs the least, with males reaching a weight of around 100 pounds. But the heaviest Mastiff is the English Mastiff; they can weigh 250 pounds; one English Mastiff called Aicama Zorba hit the scales at an astonishing 343 pounds.

Neapolitans are instantly recognizable with their folds of loose skin, intimidating size, and enormous blocky heads.

However, don’t let their imposing sight put you off because they are tremendously loving dogs and make lovable pets for all the family, including children, when socialized correctly.

You’ll definitely have to rearrange your living environment for your Neapolitan Mastiff; they typically don’t get how big they are and can be pretty clumsy, navigating their way about the home.

How Heavy Are Neapolitan Mastiffs?

How Big Are Neapolitan Mastiffs?

Tibetan Mastiffs are intimidating guardian dogs; they are territorial and wary of strangers. They have a sweet disposition towards family but are ever vigilant about strangers.

Surprisingly agile for such a giant dog, they are muscular and mighty. As with all Mastiffs, they have a large, broad imposing head, yet have expressive eyes that give them a very wise and intelligent appearance.

How Heavy Are Tibetan Mastiffs?

How Big Are Tibetan Mastiffs?

The Turkish Mastiff is a Molosser-type guard dog and originally came from the Anatolian city of Aksaray in Turkey. The Mastiff’s name comes from the Turkish word “Malak,” which means lip, and “Malaklisi,” meaning “with lips.” This describes the Mastiff’s pronounced, droopy, and black lips.

How Heavy Are Turkish Mastiffs?

How Big Are Turkish Mastiffs?

When you translate from the original Africaans language, Boerboel means “farmers’ dogs.” The Boerboel was bred for protecting and guarding farms and families against large wild animals, such as lions.

For such large dogs, they are incredibly agile and are fiercely protective of their family. The Boerboel must be socialized early to tone down their protective side a little. However, they are a devoted and loving family companion.

How Heavy Are South African Mastiffs?

How Big Are South African Mastiffs?

Tosas are patient, calm, and courageous dogs; they were initially bred as fighting dogs. The Tosa is a patient and kind family dog but not overly friendly towards strangers. The dog is also not keen on other dogs they don’t know and can react aggressively if they feel the dog might be threatening their territory. However, it’s unusual for a Tosa to show any aggression towards humans.

How Heavy Are Japanese Mastiffs?

How Big Are Japanese Mastiffs?

The Pyrenean Mastiff originates in the area of northeastern Spain, and as far back as the 12th century, humans relied on these dogs to guard and protect their livestock.

They are giant dogs but with soft hearts. The dogs love human companionship and do well within a family environment, which can also include children. Even today, they still exhibit their guarding instincts.

How Heavy Are Pyrenean Mastiffs?

How Big Are Pyrenean Mastiffs?

Great Danes are one of the most recognizable Mastiffs on the planet. However, people might not know them as Mastiffs. Another quirk is the dog might be called Dane, but they are from Germany and not Denmark.

The Germans bred Great Danes to hunt wild animals such as wild boars and wolves. These days the dog makes a fantastic family pet and is truly a giant lap dog.

How Heavy Are German Mastiffs?

How Big Are German Mastiffs?

Farmers used these giant Mastiffs to guard and protect their flocks, and it’s thought the dog was developed over 2000 years ago, possibly a descendant of the White Greek Shepherd dog (Alabai).

Today the Abruzzese Mastiff is a kind and gentle family dog and is happy to share the home with other family pets, although not so trusting with humans they don’t know.

How Heavy Is The Abruzzese Mastiff?

How Big Is The Abruzzese Mastiff?

The Spanish Mastiff is the epitome of the gentle giant. Originally in service to humans as protectors and guardians of livestock and property. The Giants have morphed into gently, kind, and calm family companions.

The Spanish Mastiff is not that well known outside of his homeland, and it can be challenging to find breeders. Spanish Mastiffs make lovely family pets, but they need an experienced owner to socialize and train them correctly; they are exceptionally strong-willed.

How Heavy Are Spanish Mastiffs?

How Big Are Spanish Mastiffs?

The English Mastiff is an ancient dog; some say his roots go back over 5000 years. These are gigantic dogs that need some serious room, so you’d better have a large enough home to accommodate one.

However, if you love giant breeds, don’t mind drool, and want a lovable, kind, and gentle dog, the English Mastiff might be an excellent choice.

How Heavy Is An English Mastiff?

How Big Is An English Mastiff?

Are Mastiffs The Biggest Dogs?

Mastiffs are one of the biggest dogs in the world, certainly as far as Kennel Club registrations. Irish Wolfhounds might be slightly taller than a Great Dane, but if you combine the size and weight of the English Mastiff, not many dogs will come close.